Lila is 7 and to her grandparents she’s a coding super-hero! Her Dad, Anthony, tells us about how they like to play Kano together before bed to make stuff and get homework help. 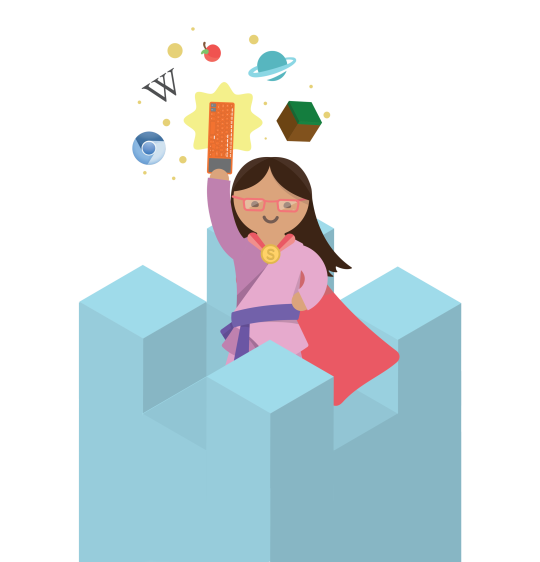 Bedtime is a pretty busy time in our house, just like everyone else’s. With the Kano, Lila and I have managed to carve out some special time, even if it’s just 30 minutes to play Minecraft together, or create stuff with code.

Generally Lila is playing and I’m watching what she’s doing and helping her when she has questions or needs a hand. We treat the Kano as her computer. Homework comes first but sometimes we might use Chrome on the Kano to research stuff on Wikipedia before we start playing. We’ve given Kano a permanent home on the TV stand so we don’t need to waste precious time setting it up every night; we can just jump on and start playing immediately.

Lila has grown up with computers, iPads and iPhones, and like all kids these days she just naturally knows how to use them. We saw Kano as a more constructive type of screen time, and also a way for Lila to understand more about computers and coding from an early age so she doesn’t see it as difficult or complex. Lila took to the Kano, and to coding, really naturally. Now she just takes it in her stride.

There’s this perception that coding is complex but actually for Lila it’s a very natural interaction, she swaps between playing with Minecraft to changing something in Make Minecraft with code, and back. There’s nothing extraordinary about that to her, she’s come to expect that she has control over computers and that it’s easy and natural to change things.

Actually, what’s really amusing is watching her grandparents as she’s coding. To them computers are complex and foreign, and they can’t quite believe that their seven year old granddaughter is telling a computer to change the shape and colour of a balloon and that it’s happening in front of their eyes.

Lila loves Lego and building things, and with Kano it’s just another way of making stuff but this time it’s with code blocks instead of Lego bricks.  At the minute she’s busy building herself a palace in Minecraft. She found Minecraft a little difficult to begin with but she was so proud of herself when she worked it out, and now she’s a natural.

As a father of two young girls I’m passionate about showing my daughters that they can do anything they put their mind to. Often with products aimed at kids there’s a real emphasis on pink or blue, and that’s something that I hate with a passion. This may be my perception as a dad, but I think girls are far more patronised by toy makers than boys are. If Lila gets a Lego Friends toy then I’ll buy her a Lego City set to balance things out. I recently gave her an Action Man with a working parachute for her to chuck out of windows.

I love that Kano is completely gender neutral (I only recently twigged that was why it’s orange), and that it’s showing Lila that she can make stuff and control computers with code.

Do you have an interesting Kano story too? Share it with us and be in with a chance of winning a Powerup kit and becoming a face of Kano.

Win a toy version of your character!

Bringing technology into the curriculum, enter the City of Alpharetta

The story of Lila

Join the thousands who inspire